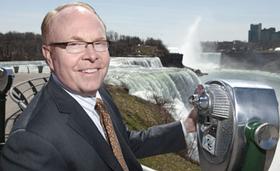 Niagara Gazette — With the one-day spectacle that was Nik Wallenda’s wire walk from Terrapin Point to Table Rock complete, the question on most minds is how can the region capitalize long term?

People were talking about it, not just locally but around the world. Niagara Falls spent the majority of the evening trending worldwide on Twitter, a feat usually reserved for large sporting events like the Stanley Cup Finals and the Olympics.

“Every destination wants their name or their brand in people’s minds,” Niagara Tourism and Convention Corp. President and Chief Executive John Percy said. “When Niagara Falls was repeated (like that), that’s exactly what we want.”

Taking advantage of the repetition, though, is a little more daunting than recognizing the immediate impact the wire walk had for the city and the entire area, Percy added.

Bringing people to the area now isn’t going to be about witnessing history happen again, it’s going to have to be about visiting the rushing waters Wallenda conquered high on his 2-inch thick wire, he said.

“People can’t come and witness history again,” he said. “That was (Friday) night. But to see the photographs, and there were plenty of amazing shots out there, we think people are going to want to see this all first hand. They’ll want to see the Falls in all its glory.

“We have to try to capitalize on everything that took place now. Our job is to keep the awareness out there. We need to continue with the marketing, and social media marketing is a big part of that.”

While the NTCC looks to take advantage of the post-walk hype, the area’s hotels and motels continue to look for ways to fill their rooms. While many of them didn’t completely sell out Friday for the historic walk, Frank Strangio, president of the Niagara Falls Hotel & Motel Association, said the future is bright.

“I felt all along the greatest impact of the walk is not this weekend, it’s what will come in the next few years,” he said. “It was awesome. That said, the real value is in the future. It’s trying to figure out how we can use the images of this area to sell Niagara Falls in the future.”

Wallenda’s walk wouldn’t have happened without the work of state Sen. George Maziarz, R-Newfane, who first met with the daredevil two years ago to discuss the possibility of making the walk.

A day later, Maziarz said he’s still extremely excited and the images of Niagara Falls shown nationwide on ABC and around the world on several foreign networks were fantastic.

“It was flawless,” he said. “The city never looked better.”

The senator was especially excited by the level of activity displayed on Old Falls Street, which he said he visited multiple times throughout the course of Friday’s day-long event.

But the atmosphere on the brick road, he said, combined with the people gathered on Goat Island and everywhere else, really led to a different feeling in the air.

“For first time, while I was walking around Niagara Falls, I noticed people felt good about (the city), they felt good about themselves,” he said. “One comment I was told was … that it felt like the Canadian side. This is about more than a one-day event. Sure, it was a single event, but we can keep this thing going. There’s a lot of potential.”