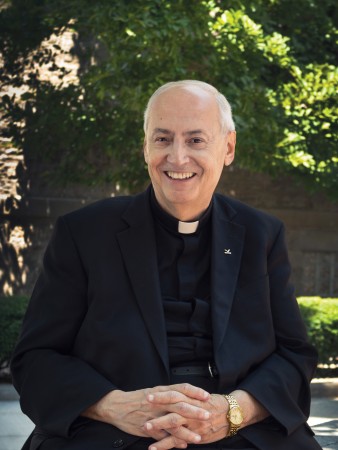 The St. John’s University Board of Trustees has elected the Rev. Joseph L. Levesque, C.M., to serve as its interim president while it conducts a national search for its next president.

Father Levesque will assume the role at St. John’s on Aug. 1, 2013, the same day that the Rev. James J. Maher, C.M., begins his tenure as president of Niagara University.

While Father Levesque’s connection to Niagara is well documented, he also has a longstanding relationship with St. John’s, including time as chairman of the Board of Trustees from 1990 to 1999, and as a member of the Board from 2000 to 2009.

“We are confident of a seamless transition as Father Harrington steps down as president at the end of this month, and know that, over the coming academic year, Father Levesque will continue to build on his outstanding record of accomplishment,” stated Peter P. D’Angelo, chairman of the St. John’s Board of Trustees. “To permanently fill the position of president, we will be conducting a national search over the next several months.

“Please join me in thanking Father Harrington for all he has done to make St. John’s a university for the 21st century, and in extending a warm welcome to Father Levesque.”

Father Levesque announced in January that he would be resigning from his position at Niagara, effective Aug. 1. At that time, the university’s Board of Trustees conferred the title of President Emeritus on him, meaning that he would remain on campus to Niagara in ways designated by the new president and in a manner familiar to Father Levesque, especially in the areas of institutional advancement and in relation to the Institute for Civic Engagement. (In May, it was announced that the institute would be renamed in his honor.)

“I am very grateful to the many people who have taken the time to wish me well over the past few months, and I look forward to speaking with many of you over the next few weeks,” Father Levesque said. “I will remain close to Niagara while I am away, and I look forward to returning to fulfill my role as President Emeritus, and especially my commitment to the Institute for Civic Engagement.”